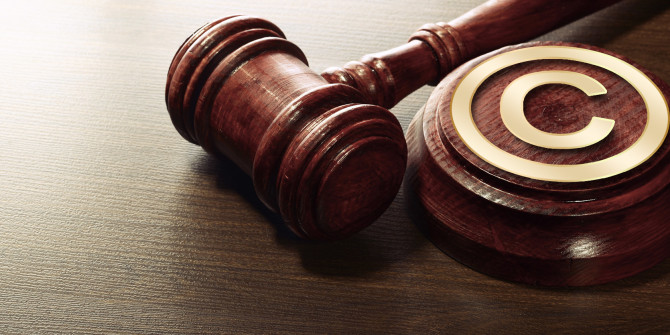 In recent times, the swift and large scale penetration of the Internet has been a matter of concern for policymakers almost as much as it has been a cause for celebration for the users. Social Media has revolutionized the way people meet, interact and communicate in the virtual world but this revolution has not been without consequence. Questions about the protection of intellectual property rights in the virtual world are steadily surfacing in academic circles. Drawing from this background, this note focuses on nexus between the rights of the copyright owner under the Indian Copyright Act and the seemingly innocuous Terms of Use of social media websites that host user-generated content. It also discusses the defenses to copyright infringement in the context of social media as interpreted by the courts. The note also observes that governments are beginning to look upon this area with interest and progresses to identify some of the more recent tools developed to address copyright issues on social media websites.

Finally, to conclude the note by succinctly summarizing the observations and makes recommendations for the way forward:

Social media has begun to make its presence felt in our lives in a myriad of ways which we could not have envisaged less than a decade ago. We certainly had our means of access to information revolutionized by digital technologies some years ago but it continued to be a one-way street; we acted only as “consumers of culture”. Suddenly, the Internet is becoming a lot more interactive. Users have graduated from an erstwhile ‘ordinary’ lifestyle of merely reading books and going to the movies to a daily routine of actively participating and engaging on social media platforms — Facebook, Twitter, Pinterest, Flickr, Instagram, YouTube to name just a few. Those consumers have now transformed into users that generate culture; for whom words like ‘commenting’, ‘liking’, ‘uploading’ and ‘posting’ are now an inseparable part of their common language. Clearly, it is changing how we perceive the Web and for copyright law, in particular, presents unprecedented questions and challenges.

In a recent copyright infringement lawsuit, a Manhattan jury found that Agence FrancePresse (AFP) and the Washington Post infringed upon the copyright of photojournalist Daniel Morel by using pictures that he had taken in the aftermath of the Haiti earthquake in 2014 . Curiously, these pictures had been uploaded by Mr. Morel on his Twitter account. AFP had argued that that once the pictures appeared on Twitter, they were freely available as a part of the public domain. However, it is quite heartening to see that some websites have begun to include the implications of the license terms in simple English along with the accompanying legalese to help users understand what they are agreeing to.

Strangely, despite overboard license terms and large scale infringement over social media, cases that have gone to court still remain almost negligible in number. But considering the uncertainties associated with the Fair Dealing doctrine, it is nevertheless advisable for users to be careful in determining whether the material they are sharing or linking to is copyrighted. Memberships of social media websites continue to grow every day and organizations across the world are making efforts to devise models that can help reduce the copyright implications on social media. But the law cannot lag behind for too long. This transformation of the culture of the web is something the Legislature can no longer ignore. It is time for the legislative process to adapt, evolve and do something about it.